All Hot Springs Jazz Society concerts are contingent upon the ability to have the event under COVID guidelines.

Please check back regularly for any changes to the schedule that may be due to COVID guidelines. 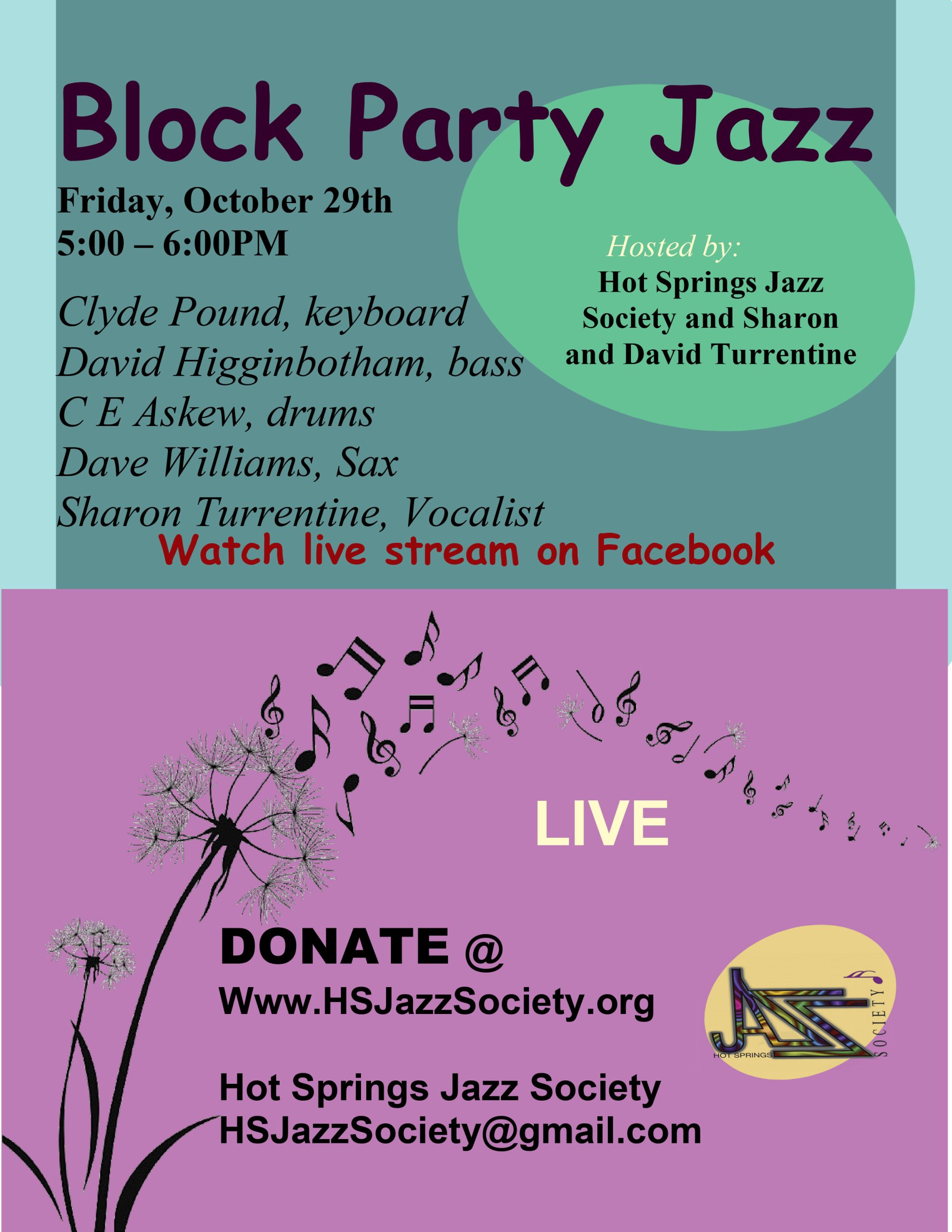 Bring a chair, coolers are allowed. The block parties are outdoors weather permitting. It is advisable to check weather conditions before attending as time does not permit a notice of cancellation.

For entry into Hot Springs Village, non-property owners please click here and print out this flyer to show at the gate.

ABOUT THE ENTERTAINMENT WE HAD THIS YEAR AT JAZZFEST

The 106th Army Band formed in 1898 and soon after was mobilized for the Spanish-American War. In World War I the band was named the 153rd Regiment Band and served in France with the 39th Division. During World War II, the band served in Seward, Alaska and was redesignated the 106th Army Ground Forces Band. In October 1957, the 106th was ordered into active federal service at North Little Rock as part of the desegregation crisis at Little Rock’s Central High and the band led the inaugural parade for President William Jefferson Clinton in Washington, D.C. on January 20, 1993.

Saturday “Jazz In The Streets”

ATM (Anything That Moves)

ATM is a specialty band made up of some of Arkansas’ finest musicians. Led by music director/arranger/pianist Clyde Pound, the Jazz ensemble plays a wide variety of music ranging from swing to modern jazz. Moving to Arkansas after an impressive career in San Francisco as band leader at the Hungry i nightclub and as music contractor and recording producer in Hawaii, Clyde has formed ATM to showcase his extensive jazz combo experience.  Included in ATM are Les Pack on guitar, David Higginbotham on bass, Brandon Brockinton on drums, Gary Meggs on saxophone and director, Clyde Pound on keyboard.

As part of the Airmen of Note, Askew has performed all over the United States and Canada, Argentina, Brazil, Chile, Panama, Uruquay, England, Luxembourg, Germany and Turkey, appearing with jazz legends like Bobby Shue, Diane Schuur, and Arturo Sandoval.  Following a concert with the Count Basie Orchestra in which the two bands took turns performing, the legendary Basie pointed at the Airmen and said, “That band is a gas.”  C.E. Askew has literally seen the world as a jazz musician, performing with a legendary of list of entertainers, including Tony Bennett, Herbie Hancock and Shaka Khan.

Shirley Chauvin studied jazz and music education at North Texas University. She has led her own jazz and fusion combos in the Dallas area, opened for Dionne Warwick, John Davidson, Mel Torme and often appears at jazz festivals in Texas, Oklahoma and Arizona. Chauvin has performed in the Abilene Philharmonic Pops series and tours with the Arkansas Jazz Orchestra. She is the director of S’Wonderful and the co-director of the Stardust Big Band (performing Sunday). Chauvin is a founder of the Hot Springs Jazz Society, is a past President and is presentlyserving on the Membership Committee and Editor of the Society newsletter, HotNotes. Chauvin is a key contributor to the production of all Jazz Society programming and directed the programming for twelve JazzFests.

Saturday “Jazz in the Streets” as Emcee

NuFusion, is the name of Henderson State University’s annual Spring semester jazz ensemble project. Henderson’s jazz program is unique in its contrasting repertoire between semesters. In the fall, the jazz ensemble focuses on traditional and contemporary big band styles from current, all the way back to the Big Band Era. In Spring semesters, the ensemble presents a unique project centered around student arrangements of a much wider variety of styles, which culminates each year in a late-April outdoor concert, with professional sound and lighting on the beautiful Henderson Quad. The NuFusion project features Henderson’s big band and vocalists, presenting student arrangements of tunes by jazz, rock, pop, and other styles of artists. NuFusion is often an eclectic mix of songs and pieces, but the student group is always energetic and accessible to a large range of audiences. Under the direction of Dr. Rick Dimond, the NuFusion project is frequently asked to perform at regional events around Arkansas, most notably the Hot Springs JazzFest.

David Higginbotham is an active bassist/vocalist who can be heard regularly on Thursday night’s Jazz set at the Ohio Club in Hot Springs. He’s also a member of the dance band, The Bob Boyd Sounds, where for over twenty years his lead vocal skills have been a highlight of their sound. He performs in pit orchestras for many of the touring Broadway shows that come to Robinson Music Hall including, Wicked, Phantom of the Opera, Chicago and Beautiful, the Carole King Musical, to name a few. He recently released his second solo recording ‘Blues on the Corner’, which is a collection of jazz standards performed with some of central Arkansas’ finest musicians. This follows his solo recording debut ‘This is My Heart’ on which David played all the instruments, sang all the vocals and wrote all the songs. When he’s not performing, he teaches music in the Little Rock School District.

Mezzo-Soprano, Diane Kesling’s career has included singing engagements with some of the world’s leading opera houses. She was a solo artist on the Metropolitan Opera roster for fourteen years, where she performed over 40 roles. Kesling’s professional career has scheduled her all over the world and includes appearances with the most prestigious Opera companies in the world. Since moving to Arkansas, Ms. Kesling has become a teacher of singing, and currently is a professor of voice at the University of Arkansas at Little Rock, where she maintains a full studio.

Professor Emeritus from the University of Missouri-Kansas City, is the host of “Jazz On A Saturday Morning” on the new Hot Springs community radio station – KUHS-FM, 97.9 on the FM dial. Known to his listeners as “The Other Dr. John,” Leisenring plays jazz on Saturdays from 10:00 AM to 1:00 PM.

Gary Meggs has been a performer/educator for 30 years and is currently the saxophone professor, director of bands and jazz band director at the University of Arkansas at Monticello.  He is presently performing on a regular basis with the Arkansas Jazz Orchestra in Hot Springs Arkansas, a long with special clinics and performances at schools and venues throughout the south.  Gary is heavily involved in jazz education throughout the southern US.

Clyde Pound’s career spans decades as performer, producer and composer to some of the most notable artists and groups.  He has performed jazz with Dizzy Gillespie, Maynard Ferguson, Dave Pell, Chris Conners and Johnny Mathis.  He was band leader at the world famous Hungry i nightclub in San Francisco where he worked with Laura Nyro, Mel Torme, Noel Harrison, Bill Cosby, Robert Klein, Richard Pryor and even Flip Wilson.  In Hawaii prior to relocating to Hot Springs, Pound acted as President of UNISON INC which provided bands for Jim Nabors, Rich Little, Danny Gans, Julie Budd, The Letterman, Connie Hanes, Dianne Carroll, Vic Damone, Rodger Williams, Joel Grey, Playboy’s Girls of Rock & Roll, The Supremes, Sammy David Jr., Frank Sinatra, Liza Minnelli, Fred Travolena, the Temptations and many many more.  He was also the Musical director, arranger and keyboardist with the dance band ATM and the Honolulu Swing Express.  His talents are not limited to the stage however as Pound has worked on commercials for Harley Davison, Honda, Talco Bell, and Simons as well as the music soundtrack for the Kanai Helicopters promo featuring Orson Wells as shown on United Airlines.  Since his arrival in Hot Springs, Pound’s career has shown no signs of a slowdown.  He has recreated the dance Band ATM (Anything That Moves) playing the keyboard, has taken on the role as Entertainment Chairman of the Hot Springs JazzFest 2007 thru 2017 and was former President of the Hot Springs Jazz Society.

Rodney Block got his start as a trumpeter playing a hand-me-down horn. The trumpet originally belonged to his older brother Otis Jr., who had given it up. That was the first of Block’s Sweet Babies — the nickname he gives all of his trumpets. Well, almost all. He calls his tiny pocket trumpet Baby Sweet Baby.  “My older brother started off on trumpet, but he didn’t stay with it. So my parents said ‘If you are going to be in band, you have to play your brother’s trumpet.’ And I was fine with that,” he says. “I got the hand-me-down trumpet, but I was excited about it.”

His Rodney Block Collective is a quartet that plays a range of genres — jazz, hip-hop and even a little country. His second band, Rodney Block and the Love Supreme, is known for eclectic hip-hop.

Stardust Big Band is the quintessential big band based out of Hot Springs Arkansas, the city that came into its own during the jazz era. Come join the dancers and music aficionados from Arkansas as well as the six surrounding states to hear the driving swing, melodious ballads, rhythmic Latin, and 20th century pop tunes that will make you feel young again. Stardust continues a 25-year tradition of performing at the Arlington Resort Hotel New Year’s Eve Gala.  Whether you come to dance or just come to listen, we invite you to be a part of the continuing history of musical excitement that is the Stardust Big Band.

TAYLOR SMITH AND THE ROAMIN’ JASMINE